In the English speaking world, commercial e-mailings and newsletters typically use either an informal salutation such as “Dear Rolf” or – even more commonly – none at all. In this respect, however, German language e-mailings to professionals in Germany, Austria and Switzerland (the so-called “DACH” countries, an abbreviation composed of their country codes as found on cars) are an entirely different ball game. People expect to be addressed personally and formally, surname included and a “Herr” or “Frau” preceding it. What’s more, many still like to see titles such as their PhD (“Dr.”) in front. All this also serves to prove that you know who they are and that you are e-mailing them information that is relevant to them, rather than sending spam out to the millions. So if you are disseminating German language e-mailings, it is important to know the gender, full name and any titles that your recipient may have.

I recently received an invitation from a German company to visit the dmexco trade fair in Cologne. The e-mail had a professional look about it, but nevertheless slightly irritated me as a German: it used a form of addressing me that is uncommon in German language correspondence. I wondered why anyone would greet me with “Guten Tag Rolf Preuß” (literally: good day Rolf Preuß). Informally among colleagues or among friends and family, “Guten Tag Rolf” would be alright, as would “Guten Tag Herr Preuß” in business correspondence. But “Guten Tag Rolf Preuß”? No way. Was the sender unaware that I am a male and thus chose this salutation deliberately? And this, although I had registered for the newsletter myself, using both my first and my last name.

Will we meet at the dmexco in Cologne?

In a survey of the senders of newsletters and e-mailings, Dr Torsten Schwarz of absolit.de asked for the salutations used. The result, for me, was surprising: 236 different forms of addressing recipients were in use! The most common one at 35% was “Sehr geehrte Frau …” and ” Sehr geehrter Herr …”. Only 4% used “Guten Tag first name, surname”.

In order to understand why I was addressed in the e-mail with merely my first name and surname, I underwent the registration process for the newsletter again. Lo and behold, the company asks only for the first and last names and the e-mail address. Therefore, the company didn’t have the information to send e-mails addressing a “Herr” (Mr) or “Frau” (Mrs or Ms). Without knowing the gender of the e-mail recipients, the software can only produce something like “Guten Tag first name” or “Guten Tag first name and surname”. 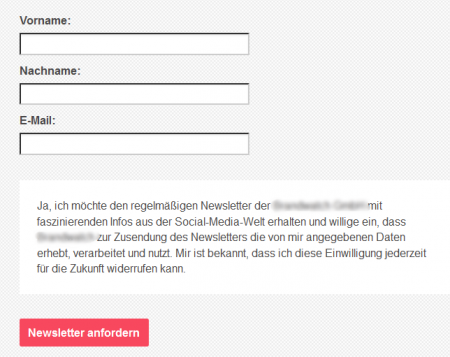 Registration form for an e-newsletter without gender specification

To address recipients of German language e-mailings properly as is customary in their countries, registration forms should always ask for titles and gender in addition to the full name. This can also be done in a separate step, as absolit does for its newsletters. 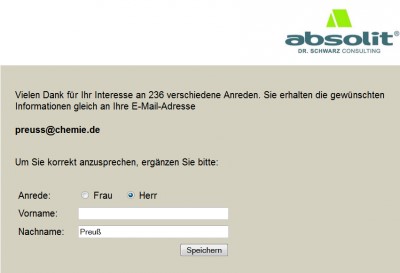 absolit: asking for subscribers’ gender to address them appropriately in e-mails

Which form of salutation do you prefer for your business newsletters and e-mailings? How do you address your e-mail recipients? I’d be keen to find out your opinion.

Rolf Preuß, born in 1960, can look back on more than 25 years of experience in the marketing of complex products that require explaining. As early as 1996, he created the first website of a leading laboratory equipment manufacturer. Since 2002, he has been working intensively on lead generation via the Internet, using a variety of methods. Since February 2014, Rolf Preuß has been Marketing Director of LUMITOS, providing his online marketing know-how to B2B customers in the chemical, life science, lab equipment, pharmaceutical, analytical and food & beverage industries.
Related Posts

A secret about high conversion e-newsletters revealed
> find out more

What would really be interesting are your tips on how to address Germans in newsletters when you don't have the gender information and just the first name and last name. Going by this "Guten Tag" still seems like the best option.

Your email address will not be published. Required fields are marked *
26, May | Rolf Preuß

Hi Michael, not so easy to answer. It depends on the purpose of a newsletter. In the example I showed (invitation to the dmexco exhibition) it would've worked fine without any salutation. "Guten Tag" is better than "Guten Tag Rolf Preuß" but still not good. Because it raises awareness that the sender likes to sound personal. But it is clear he isn't.

Your email address will not be published. Required fields are marked *
26, May | Rolf Preuß

I strongly recommend this. Follow the local rules whenever possible. Ask someone for help who is familiar with local expectations. You'll pretty much make a better impression with your e-mails.

Your email address will not be published. Required fields are marked *